Sex might just be the most beautiful activity on planet earth, but have you ever considered that it could be keeping you looking younger? The benefits of sex are well documented in scientific literature. It is shown to relieve stress, reduce the risk of heart disease and even help with depression. This blog looks at one of the lesser-known benefits of sex: it makes you look younger.

Dr Weeks says that the pleasure derived from sex is a ‘crucial factor’ in preserving youth.

These act as natural painkillers, easing anxiety and making it easier to drop off to sleep.

Exercise boosts circulation, which is important for the heart and gives skin a healthy glow.

Human growth hormone is also released by lovemaking and can help keep the skin elastic and so less likely to wrinkle. 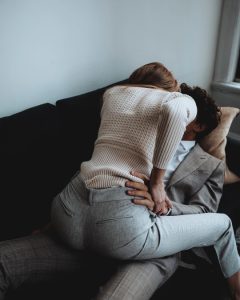 Sex can help burn fat and release substances which bolster the immune system, while simple stress relief can improve the quality of sleep.

Dr Weeks, who is addressing a British Psychological Society conference today, also found that Peter Pan types tended to be married to a younger spouse – probably because their looks belied their age.

The researcher, a ‘quite youthful’ 59-year-old, said: ‘My message is that love-making is good.’